Universal Picture built up THE MUMMY starring Tom Cruise and Russell Crowe as the rebirth of the classic Universal monsters from the 1930s, but it it’s far from that. Maybe Universal should’ve kept this buried. So how did it unravel?

Both audiences and critics gave THE MUMMY low marks as evident at the box office with a disappointing $32 million opening weekend in North America, but luckily Universal Pictures made its money overseas with $140 million take. Deadline.com is estimating the film will lose about $95 million during its run.

So who’s to blame for the poorly received film? The Variety reported Tom Cruise had creative control over THE MUMMY and usurped power from director Alex Kurtzman while others claim the second-time director was over his head with the big-budget production.

I’m going to side with the director on this one. CineMovie got an exclusive look at THE MUMMY with director Alex Kurtzman back in December and he presented his vision of DARK UNIVERSE which seemed in line with the classic Universal movie monster world. His passion and vast knowledge of the classic black and white monster movies gave me hope this new franchise would be worth the reboot. However, what we saw on screen in THE MUMMY doesn’t reflect Kurtzman vision or what Universal has been selling us in the marketing materials.

Here are the five ways THE MUMMY unravels into a pile of bones.

1. Tone Is All Over The Place

THE MUMMY trailers and behind the scenes promised fans a scary movie with an action element. THE MUMMY’s tone started out as a horror tale of a self-obsessed ancient princess,  then an action comedy as Tom Cruise’s character and his unfunny sidekick are introduced while dodging bullets and bombs in Baghdad while cracking jokes about their treasure hunt. It doesn’t seem like the right time to make light of the situation in the Middle East, and that scene didn’t need a full blown action sequence. That’s money not well spent.

The rest of the movie wavers from action comedy and bad jokes to scenes that are supposed to be scary but they’re not or ruined by missplaced comic relief.

2. No Place For Comedy

We were sold a horror movie but got an action comedy instead.

THE NEW GIRL’S Jake Johnson is ordinarily a fun distraction who provides comic relief as in JURASSIC WORLD, but in THE MUMMY his sidekick shtick is tired and simply out of place. The comedy ruins some of the moments when it should be intense, but his constant funny interjections come off as whiny and annoyingly distracting.

He's not the only one to blame. Tom Cruise's attempt at light comedy is also a miss. 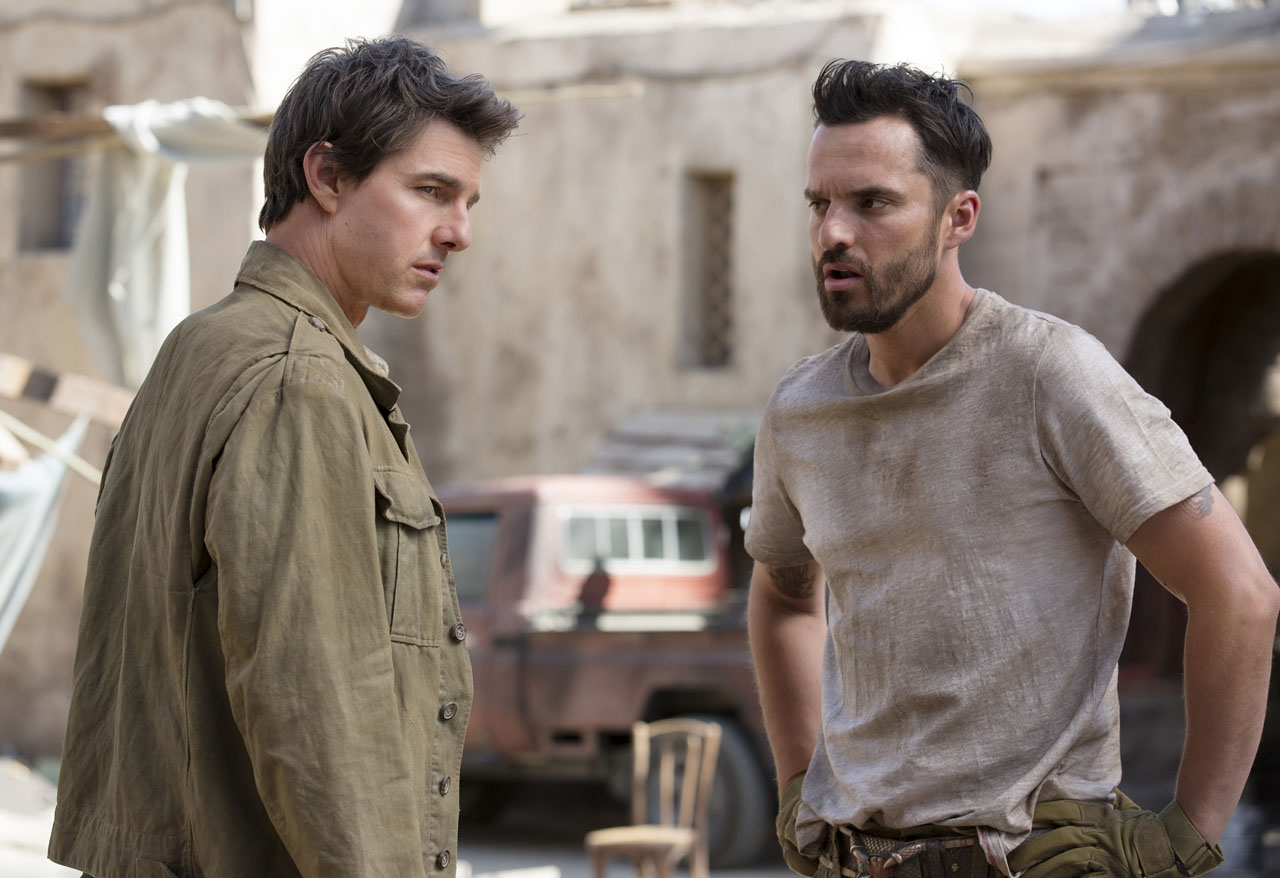 No doubt Tom Cruise is an action junkie, and the film is riddled with unnecessary action for the sake of giving Cruise something to do. Although the zero gravity stunt was the coolest part of the movie.

Tom Cruise seemed like an unlikely candidate to star in a reboot of the classic Universal monsters, but he has reinvented himself in the past in films such as TROPIC THUNDER and JERRY MAGUIRE so naturally he should try his hand at the horror genre.  However, this MUMMY is not a horror movie as previously sold. Somewhere it became an action movie more in line with the Brendan Fraser movies than a throwback to the black and white monster movies from Universal Pictures.

When did this shift from horror film to action happen? The Variety article claims Tom Cruise brought in additional writers to change the script which initially focused more on the princess rather than the Nick Morton character.  That would explain why Sofia Boutella’s mummy princess was so poorly developed.

4. The Mummy Wants Her Daddy

The monster in this story, Ahmanet, the ancient princess, is reduced to a woman simply looking to hook up with a man. Seriously, the only way to become more powerful is to mate with the chosen one?

There’s no range to Sofia Boutella’s one-sided monster. She’s pure evil and there are no redeeming qualities to her existence. She kills an innocent baby for heaven’s sake. There’s no coming back from that.

In the original monster movies from Universal Pictures, the conflicted monster’s emotional journey was the most memorable aspects of those horror films. Bela Lugosi, Boris Karloff and Lon Chaney Jr.’s portrayal of those monsters brought some gravitas and pathos to their memorable characters. There is none of that here in the Mummy character.

Russell Crowe’s Dr. Jekyll sets up this his new world order of monsters in lengthy monologues and narration that ultimately explains that Prodigium is a clandestine organization that keeps these monsters in check. It’s their answer to Marvel’s S.H.I.E.L.D. of the universe. The premise of that sounds great, and that’s what should have been the focus instead of a side note.

Crowe’s Dr. Jekyll is a far more intriguing character than Cruise’s character. Delving into his story and how he became the head of this organization would’ve been a far more interesting angle.  His character was more in line with the classic Universal monsters as someone who is conflicted about his dark side. At a press day for THE NICE GUYS last year, Crowe boasted about how his Dr. Jekyll would be a more frightening version, but there was some semblance of that in THE MUMMY, however, not as promised.

Russell Crowe Hints at Possible Approach to Playing Dr. Jekyll in THE MUMMY with Tom Cruise

Hopefully Universal learns from this huge misstep, and deliver the movies promised for this Dark Universe.