WISH UPON may be a horror movie, but the characters are quite colorful in every sense of the word. Slowly but surely, Hollywood is moving past the token minority kid who gets killed off early as evident in WISH UPON’s ensemble cast with a diverse cast that includes Ki Hong Lee (THE MAZE RUNNER, UNBREAKABLE KIMMY SCHMIDT) . Lee considers himself lucky to be acting at this time when Hollywood may finally be reflecting what the real world looks like.

WISH UPON is the latest thriller from the director of ANNABELLE. Seventeen-year old Clare Shannon, played by Joey King, is barely surviving high school when her father (Ryan Phillipe)  gifts her an ancient musical box with a Mandarin inscription that promises to grant the owner’s seven wishes. When her wishes of becoming popular and getting the school jock from come true, she realizes her ambitions have consequences with those around her dying in a gruesome manner.

Ki Hong Lee plays Ryan, a typical high school student who loves skateboarding. When Clare needs help translating the Mandarin inscription on the box, it’s his chance to hang out with his school crush. He becomes her friend and part-time conscience.

Ki Hong Lee spoke to CineMovie about his role in WISH UPON, and his first impression of the story.  He made the mistake of reading the script in the evening.

“I was looking over my shoulder the whole time. It’s a good sign when you’re getting scared reading it.”

Lee enjoyed shooting WISH UPON because of his co-star Joey King and director John Leonetti.

“They’ve been phenomenal to work with,” says Lee “I was very, very lucky that they are not only talented but also genuinely nice people. I find that very rare in Hollywood. It was nice.”

Many would be surprised at hearing that most sets are not friendly, but after reading Frank Darabont’s profanity-laced emails from the AMC lawsuit, perhaps we shouldn’t be.

Lee and King have a fabulous chemistry on screen in WISH UPON, and the actor says it translated off screen as well. He describes King as “talented” and a “consummate professional,” and when the cameras weren’t rolling the two had fun between the scares. 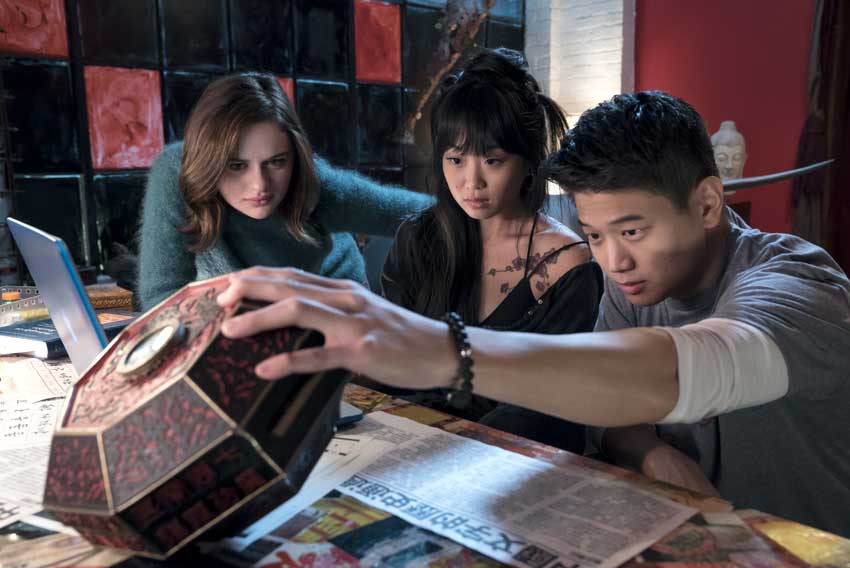 Like Netflix’s 13 REASONS WHY, WISH UPON reflects the high school body in a more realistic way. Three actors of Korean descent star in WISH UPON, and against expectations, the filmmakers and story don’t resort to stereotypes. You expect the story to bring in caricatures of Asian characters when the mysterious box’s lettering is identified as Mandarin.  When Clare and Ryan go see Ryan’s cousin who’s an expert in ancient Mandarin, you expect a grandfatherly-like person. Instead his cousin is a young hipster woman living in a cool loft. Lee credits the director for the positive portrayals.

“Hats off to John. John Leonetti, the director who championed that and made sure it wasn’t that. That these characters weren’t a caricature of a certain race or ethnicity. He was really good about that. I’m proud to be part of a film that doesn’t necessarily make fun of ethnicity.”

Lee also stars in the MAZE RUNNER franchise, another movie in which the ensemble cast reflects America’s population. He recently wrapped the third and final installment of MAZE RUNNER: THE DEAD CURE opening January 12, 2018.

“It’s about time that they realize that being diverse in terms of casting is actually more in line with reality. We live in a time where it’s not one person’s perspective. There’s a variety of perspectives that needs to be told and different stories that need to be told.”

Lee feels fortunate to be an actor in this day and age when things are looking up for people who look different than the usual television and movie leads.

“You have to be very lucky to be a person of color and be able to book a role and work in this business. It’s not perfect but I feel like we’re making progress. Change takes time.”

Unlike Joey King’s WISH UPON character, Lee wouldn’t wish for a quick fix.

“I’m a firm believer in you reap what you sow. This is definitely a cautionary tale and if you want something, go out and work hard and try to get it. There are no shortcuts in life or in this business. You have to work your ass off and hope you get lucky.”

In the past, Lee has thought about creating opportunities for himself through writing his own material, but his main focus is acting for now.

Catch WISH UPON in theaters now.